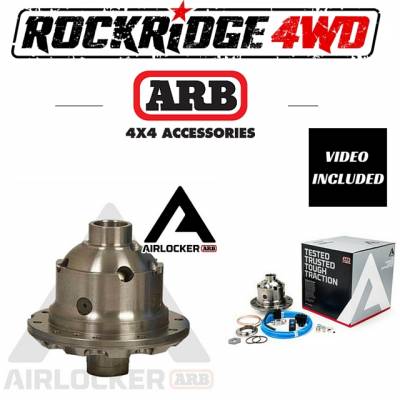 "With our improved two piece design available right across the range, along with the addition of forged gears and an industry leading five year warranty, ARB Air Lockers are now better built and better backed than ever before.

Created to provide 100% traction on demand, without sacrificing any of your vehicle's highway driving performance, ARB Air Lockers employ a 12 volt ARB Air Compressor designed to activate (and deactivate) a solid and durable locking mechanism inside the differential. This gives you the traction you need, when you need it, all at the flip of a switch and all within the comfort of the driver's seat.

The advantage of the ARB Air Locker lies in the pneumatically operated locking system inside the differential. When activated, the Air Locker prevents the differential gears from rotating and therefore prevents the axle shafts from turning independently of each other. With both wheels tied directly to the rotation of the ring gear, the vehicle maintains maximum possible traction at all times. When unlocked, it operates just like a conventional 'open' differential.

In addition to providing outright improvements to a 4x4's off road capabilities, the Air Locker offers significant environmental benefits. An Air Locker equipped vehicle can be driven in a slower, safer and more controlled manner, greatly reducing the likelihood of vehicle damage and environmental impact."

Features & Benefits:
5 Year Warranty*
Provides 100% traction on demand without affecting on road drivability or driveline wear.
Vastly improved traction means less reliance on momentum, which reduces the likelihood of vehicle damage and environmental impact.
Easy, convenient operation allows the user to concentrate on the terrain without leaving the comfort and safety of the driver s seat.
Ultra durable and extremely strong - only the highest quality materials used in construction.
Incredibly simple yet effective design that employs minimal moving parts, thereby ensuring maximum reliability.
Thoroughly tested and proven design trusted and used in over 80 countries around the world.
Front and rear Air Lockers available for most makes and models.
4WD & 2WD applications.
Easy installation and maintenance no special tools, skills or additives required.